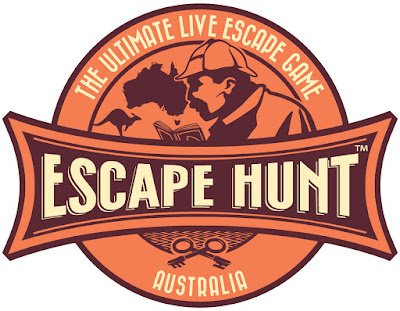 ROOM WITH A CLUE: NEW LIVE ‘ESCAPE THE ROOM’ CONCEPT TO CHALLENGE AUSTRALIANS

Escape Hunt, the worldwide live escape game phenomenon has arrived
Can you guess which live edu-tainment genre is sweeping the nation? Here’s a clue…

Based on "escape games", a popular genre for gaming enthusiasts with simple rooms you have to escape using a combination of clue-hunting and puzzle-solving. Escape Hunt takes this idea to a new and family friendly level integrating the concept of escape rooms with the exciting adventure theme of detectives solving an Australian mystery.

A unique and versatile attraction, the Escape Hunt experience involves teams of 2 to 5 people being ‘locked’ inside a mystery room and required to use their combined skills to find clues, solve puzzles and crack codes in order to beat the clock in under 60 minutes - can you escape the room in time?
Positioned in central locations, Escape Hunt’s success and mass appeal is down to its family friendly atmosphere truly catering for all audiences. The rooms cater to families of all ages (recommended 7 +), tourists and locals, corporate celebrations and team building, first dates and school groups. Teams escape from a themed room with the help of a "game master" who watches from outside via CCTV and assists as required.

For further information and to book your Escape Hunt experience, please visit www.escapehunt.com

Who can experience Escape Hunt?
• Families of ALL ages (recommended 7 +) – Families with school aged children are often looking for something different to do … why not experience something new as a family that doesn’t involve technology!
• Groups of Friends – Is it a first date? Your Footy Team? A Birthday Party or just bored? Have fun discovering another side to your mates! Larger groups can book multiple rooms to go head-to-head and see who can escape first.
• Tourists – A fresh take on the usual tourist sites and located in central locations - Escape Hunt is the perfect experience to fit between other activities!
• Corporate celebrations and team building - There's no better way to have fun and do team building than with Escape Hunt. Combined with the option of constructive team workshops based on proven psychological and business improvement methods.
• School Groups - We offer one of the most exciting indoor activities for children and an insightful way to extend their problem solving and lateral thinking skills.
• Gamers - A fun way for computer warriors to take things to the next level by playing an escape game for real – LIVE!

Sydney Escape Hunt - www.sydney.escapehunt.com
Robbery in the Cottage: The entire gold coin stash of The Rock’s largest workers cottage has been stolen. Use your keen eye, logic and quick thinking as a team to solve the mystery before the thief disappears forever.
Extortion in the Dockyard: The captain is being blackmailed and his reputation and marriage is stake! Solve the mystery in an hour before the captain’s reputation and marriage is ruined.
Murder in the Pub: This is our toughest challenge! Do you have what it takes to solve a horrible murder that’s been committed in The Rocks Pub?

Melbourne Escape Hunt - www.melbourne.escapehunt.com
The Tram Bomb Heist: Announcing the first completed tram to the public the Victorian Police receive a threat message indicating that a bomb has been planted in the tram.
Secrets of the Brewery: A Melbourne based German brew master has been murdered. It has been suspected that the agenda of the murder is to steal a secret beer recipe, which has been passed down by generations to the brewmaster.
Abduction in the graveyard: Someone has been kidnapped and preliminary investigations suggest the victim is currently being held captive at a gravekeeper’s workshop in the countryside

Gold Coast Escape Hunt - www.goldcoast.escapehunt.com
Heist at the art gallery: A large number of French impressionist paintings have been stolen from the private gallery of a wealthy and renowned artist. The thief has left a ransom letter to be paid within the next hour.
Kidnapped on the beach: A wealthy surf-loving heiress has been the victim of a kidnapping scheme. The kidnappers are demanding her weight in gold as ransom.
Murder In The Celler: The owner of a prominent Gold Coast Hinterland vineyard has been mysteriously murdered on his own property. Rumour has it that he has been involved in some suspicious business dealings. The police urgently need this case solved.
Perth Escape Hunt - www.perth.escapehunt.com
Murder in the Tavern: Bob was a frequent visitor to the local Tavern. One night a disaster struck and Bob was murdered in the Tavern. There were many suspects and you as the famous London detective have one hour to solve the crime and catch your boat back to London...... The clock is ticking, one hour to solve a Murder....are you up to it?
Robbery on the Ship: A female passenger has had her Jewels stolen on a trip from Bali to Perth. The crime needs to be solved quickly to save reputations....You have one hour. Can you solve the crime?
Escape from The Prison: Pete Swayne has escaped from Fremantle prison. There was a rumour that Pete had stashed away enough gold to bribe someone in the prison to help him escape. You as a famous London detective have one hour to find the insider and put Pete Swayne back in Prison…

Adelaide Escape Hunt - www.adelaide.escapehunt.com
Murder in the winery, Spy on the beach and a Kidnapping at the Zoo.
#bzchristmas2015 christmas Christmas 2015 escape hunt holidays school holidays things to do