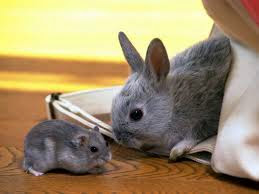 The rabbit once found a little, little dog, his name was John.

That little dog was very playful, he never went to sleep.

The rabbit decided to have a holiday, so off he went with the puppy dog, and the rabbits name was called Fluffy Jonathon.

They went onto a dog and rabbit ship, they went sailing over high seas, and the dog got sea sick. He spewed over the side.

The dog was feeling better after a while. He got used to the sea. The dog once thinked of going to a really nice island, called dog alert and rabbit search.

There was a secret base under the boat and there was people with guns. The rabbit and the dog saved the day once again and then they found a mouse.

That mousey had great trips on that boat, with the rabbit and the dog. There was a great view on the boat, you could see for miles away. They even spotted a wolf on dry land. It was an evil one that swam out to eat them!

Luckily they found dry land and found another under ground base and lived there for ever. Happily ever after.