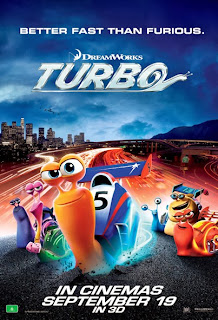 Turbo is from the makers of Madagascar and Kung Fu Panda, a high-velocity 3D comedy about an underdog snail whose dreams kick into overdrive when he miraculously attains the power of super-speed. But after making fast friends with a crew of streetwise, tricked-out es-car-goes, Turbo learns that no one succeeds on their own. So he puts his heart and shell on the line to help his pals achieve their dreams, before Turbo-charging his own impossible dream: winning the Indy 500.


I took the two terrors today to see Turbo and I for one thought it was very cute.

Master four however, went to sleep!  He is still recovering from his virus and obviously couldn't keep his eyes open any longer.

Master nine said it was cool.  Good.  (Boy of many words!)
His favourite part was the final race when Turbo was weaving in, out and under all the other cars.

We give Turbo four stars!