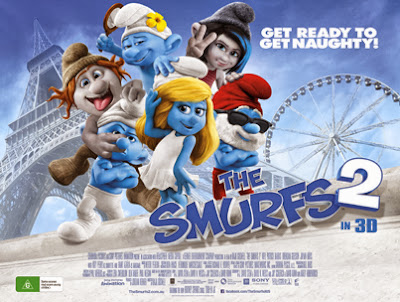 Get ready to get naughty!!

That certainly got the boys attention.  Any invite to be naughty is a good thing to them!

We grabbed our popcorn, ice creams and frozen drink and headed into Cinema 2. For the first time in a while we were lucky enough to get the very back seat row in the theatre.  YAY!  Best spot in the house. No constant worrying about keeping Master four quiet, and still in his seat for fear of upsetting the people behind us.

He actually sat pretty quiet for the most part. Which is usually a sign of a good movie.  It had his attention 90% of the time.  WIN!

Both boys (nine and four) really enjoyed The Smurfs 2. We all loved Gargamel's cat, it was hilarious to hear him laughing and talking.  The boys fave part was when Gargamel turned the Grand father into a duck.  Told ya they love being naughty ;)

In this sequel to the hybrid live action/animated family blockbuster comedy The Smurfs, the evil wizard Gargamel creates a couple of mischievous Smurf-like creatures called the Naughties that he hopes will let him harness the all-powerful, magical Smurf-essence. But when he discovers that only a real Smurf can give him what he wants, and only a secret spell that Smurfette knows can turn the Naughties into real Smurfs, Gargamel kidnaps Smurfette and brings her to Paris, where he has been winning the adoration of millions as the world¹s greatest sorcerer.

It's up to Papa, Clumsy, Grouchy, and Vanity to return to our world, reunite with their human friends Patrick and Grace Winslow, and rescue her!

Will Smurfette, who has always felt different from the other Smurfs, find a new connection with the Naughties Vexy and Hackus - or will the Smurfs convince her that their love for her is True Blue?

JacintaV said…
Thought about seeing this one but have never properly watched the first one.... only seen bits of it!
October 2, 2013 at 10:26 AM