Lucky he is so darn cute! 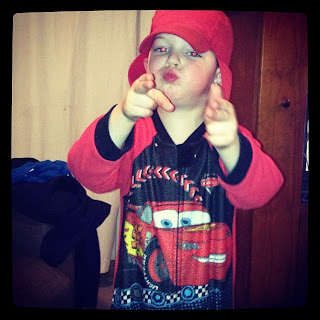 Such a fun filled Sunday.

We had footy today which was OK, no early starts so we all headed off to watch brother play.  His side lost by only two goals so they did well and Mr 9 played a good game.

Then we had to visit Target quickly. Bad move I know!

Mr 4 decided to have a tantrum, as always over a toy, so we did what was needed and rushed out.

Walking through the mall big bro turned around and said Mr 4 had two lollipops in his hand, that we hadn't paid for. GAH!!!

So I marched him back in the store, made him say sorry, refused to buy them for him because he really didn't deserve a treat after pulling that trick and we walked out.

Lots of strange looks from passers-by but I really didn't care. I was not in the mood.

He has pushed the mummy buttons this weekend I can tell you that much.  Lucky he is so bloody damn cute or I would be going bat shit crazy!