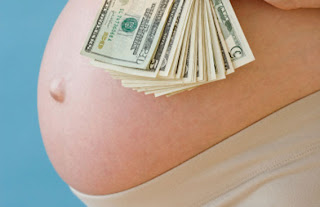 In the latest episode of Kourtney & Kim Take Miami, Kourtney offered to carry Khloé and Odom's baby should they decide to use a surrogate.

Khloé opened up to friends over dinner about her struggle to conceive....

'Since I married Lamar its been awkward,' she said.

'About a year ago we just said lets just let it happen – but when it didn’t happen Kim was like lets go to the doctor.

'I found out I don’t ovulate and my uterus lining isn’t thick enough and I have to take pills to make my uterus lining thicker, and if that doesn’t get thicker I cannot carry a baby – sometimes it just doesn’t happen.'


Kourtney said to Khloe later in the show: 'I will be the oven for her bun if she should need it.'

Khloe laughed off the proposal.

'We’ve never talked about surrogacy, I think its really sweet though – but we are just not there yet.

'But I’ll tell Lamar you are happy extending your womb to us!'

This family sure does have a strong bond! Not too long ago Kourtney was volunteering to breastfeed Kim's bub so she could have a night out when bubs arrives. Kim was not keen on the idea at all telling Kourtney how "disgusting" her proposal was.

Love the bond they have. I certainly am not strong enough or partial enough to carry someone elses child for nine months and then hand it over. Even knowing that it would make their dreams come true.


Have you ever considered being a surrogate?

Cupcakes for Alice said…
Yes, sure have.
When my cousin was struggling to conceive for many years, I first up offered to donate my eggs to her, and then offered to be surrogate for her. Seeing how much heartache they went through to have babies, It was what i felt was right to do, to help her be a Mum. I wouldn't have ever done it until I had my own kids and understood that love, I wanted my cousin to have the same.
Thankfully though, she FINALLY fell pregnant (Sonny)!
April 3, 2013 at 5:04 PM