According to the majority I am fat and lazy! 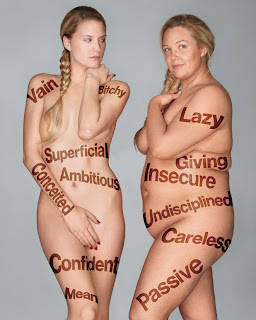 
Over half the Australian population is overweight.  Yep, you guessed it, I am one of them!

I was reading an article online today from an interview Chrissie Swan did for this month's Women's Weekly.

Chrissie has spoke out saying it is okay to be overweight... "I never bought into that, 'I am fat, and therefore I am bad' way of thinking."
Chrissie is concerned about the way shows like The Biggest Loser encourage "thin" people to belittle and YELL at "fat" people to motivate them...

"We can't say fat people are bad, we can't have them crawl through mud pits on national television and have skinny people yelling at them, saying, 'How does it feel?' Because kids see that and they go, 'Okay, it's cool to scream abuse and belittle a fat person. I'll do that next time I see Billy in the playground.'

Glamour recently hosted an exclusive poll of more than 1,800 women aged 18 to 40 based on peoples weight and the perception they have of others.

The results are astounding!

Overweight women are more likely to be labelled as “slow” than they were to use that word for a thin woman—and about 10 times more likely to assume she was “sloppy” or “lazy.”


Fat or thin, people will always find a reason to pick faults in you.  Ultimately it is up to YOU whether you let it slide right off or hit a nerve.  I am trying my best to let other peoples remarks slide right off and not put a dent in my armour.

Do you battle with your image on a daily basis? Or do you love your body and all it's special quirks?

Melissa {Suger} said…
I battle with the assumptions, not with myself. I refuse to buy into someone else's idea of who or what I am. But that's a recent thing. 30 years in the making.

Tracy at Blue Zone said…
Thanks Melissa.
You can find the links to both articles above. Click on the word Women's Weekly and also Glamour to take you direct to the article.
May 31, 2012 at 9:05 PM

Unknown said…
As I get older I am more able to appreciate me just as I am. My body has produced three gorgeous children and it is totally fine that I don't look like a supermodel. Thanks for sharing this post.
May 31, 2012 at 9:42 PM

Tracy at Blue Zone said…
I am finding as I get older I am learning to accept that this IS me and I can't make things any different. Maybe a bit lighter, but in the end I am still ME!
May 31, 2012 at 9:49 PM

Actually Mummy... said…
I think the way body image is sensationalised for tv entertainment is very dangerous to society. Having said that, doing nothing, and telling people it is ok to be overweight is highly irresponsible in my opinion. It's like telling people it's ok to smoke, or do drugs. It's not, because being overweight is not healthy, and if we don't keep that message out there we will slide into a nation of obesity full of terrible health problems.
That said, I am appalled at the labelling in that article - dangerous stereotyping. I wrote this week about my 7 year old being taunted at school foor hairy legs and arms. Nothing unhealthy about that, but you are right about society trying to make people feel bad about their body type, and it is outrageous that the media perpetuate that tendency instead of teaching acceptance
June 2, 2012 at 7:31 PM