WINNER ANNOUNCED! We love Charley Bear. Do you? WIN a cute DVD here..... 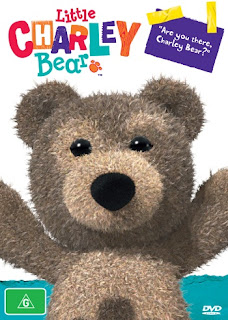 Beyond Home Entertainment is pleased to announce the DVD release of the hit new preschool series, Little Charley Bear, on September 14, 2011.

Filled with laughter, adventure and learning, the DVD, titled “Are You There, Charley Bear?” features eight fun-filled episodes.

From Keith Chapman, the creator of hit preschool series Bob the Builder, Fifi & The Flowertots and Roary the Racing Car, Little Charley Bear follows Charley, a loveable brown teddy bear, who uses his imagination to embark on a series of adventures, while all the time discovering new things about the world around him. Aimed at both boys and girls, this unique preschool series is simple, colourful and promotes the value of learning and role-play to broaden the imaginations of young children.


We LOVE Charley Bear in our house. I think he is so adorable. We all rush to claim the perfect possie on the couch to tune in to Charley Bear on ABC 4 Kids.

I have one very cute Charley Bear DVD to giveaway to a lucky Blue Zone follower.

Cheree said…
Their favourite show changes every day! Little Charley Bear is a favourite of Sophee's as she goes to school with a boy names Charlie and they call him Charlie Bear!
September 20, 2011 at 9:52 PM

Rockn said…
Both my 4yr and 2yr olds love Play School, because I have taken them to the live show, they love all the toys and when they make things. And they love that I can sing along to the songs because a lot of them are the same songs I used to sing when their older brother and sister watched it.
September 20, 2011 at 9:52 PM

rosewendy said…
My small grandchildren watch Play School too and seem to enjoy it very much. It's hard to believe how long that program has been on TV. They definitely have the formula right.
September 21, 2011 at 1:36 PM

Anonymous said…
Harlows favourite is Charley Bear, she actually runs from wherever she is to watch it when she hears the opening song! She also loves Angelina Ballerina>

Kate @ Our Little Sins said…
The favourite here at the moment is Peppa Pig. Obsessed doesn't even do it justice. He would crawl into the tv to become part of the pig family if it were possible. A fb and gfc-er.
September 22, 2011 at 6:27 AM

shez said…
My 8 and a half month old is watching Charley bear on abc4kids right now and she loves it. She thinks her Teddy bear is Charley bear when I hold it up during the show hehe but tv only lasts 5 mins so it would be great to have the DVD that lasts longer!!! She is also in love with giggle and hoot!! But then again who isn't :)
September 22, 2011 at 8:01 AM

Leimay said…
Depends on the day to what my children like best.
I'm a GFC follower, a twitter follower and a fb follower.
September 25, 2011 at 9:27 PM

silvanagu said…
Peppa Pig love others too but everytime she saw she point ans stare until it finished love cause she love animals
September 25, 2011 at 9:56 PM

The Aussie Mommy said…
Peppa Pig and Humf are my boy's favourite. I'm not sure what it is he likes about them but he asks for them by name every day! :)

The Aussie Mommy said…
following you on FB

Penny said…
My eldest son is called Charlie. He loves 'watching himself' as a bear!! It's his favourite, along with Octonauts, Robots,and Shawn the Sheep (which is secretly my favourite). penny@workingmumsmasterclass.com.au
September 27, 2011 at 9:54 AM

Laureny at The Surprise Beginning said…
There are too many to list! We do love In The Night Garden though, although the new time this year has been inconvenient - bath time!
September 28, 2011 at 6:28 PM

Laureny at The Surprise Beginning said…
Following you with GFC
September 28, 2011 at 6:30 PM

K said…
Her favourite at the moment is Peppa Pig without a doubt but she also always says "Charley Bear!" very loudly when it comes on!
October 2, 2011 at 10:06 AM

Actually Amy said…
My kids love anything on ABC kids. At the moment that have been watching Charlie and Lola a lot.

I hadn't heard of Charley Bear until the other day when Mahli pointed him out to mine. See seems in love with him.
October 5, 2011 at 6:55 PM

3AM Dad said…
Octonauts is a fav of my kids. This was a tough one, as I have 4 kids. Octonauts is the only show that will keep all of them amused and to quote my 6 year old "It teaches you to help your friends".
3amdad@tripleshotenterprises.com.au
October 5, 2011 at 6:58 PM

In The Good Books Blog said…
My girls all love Giggle and Hoot; they love singing along to Bird Bath Boogie and My Best Friend! They want Hoot pj's from Santa! :)
October 5, 2011 at 7:48 PM

Suzichesh said…
We love Charley Bear too, however The Octonauts rule in this house
October 5, 2011 at 8:53 PM

Tracy at Blue Zone said…
The lucky winner of a Charley Bear DVD is..