Is it the weekend yet?

It has been a long week and to top it off Mst 2 has croup which means very little sleep is being had by us this week.

Mst 7 had his Book Week parade today and I was resigned to the fact we would have to miss going to watch due to Mst 2 coughing all night. I decided in the end I simply had to go, Mother Guilt for not going would have killed me.  So I rugged up Mst 2 and we toddled off to school to watch the parade.

Mst 7 decided on Zac Powers this year for his costume. He loves reading this book series....... 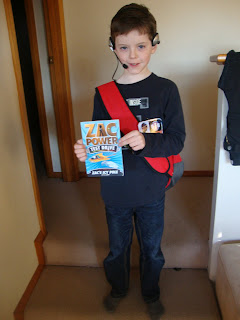 We waited for an hour to see Mst 7 and his class show off their costumes and Mst 2 was getting very restless! Sadly I had to leave in the end and missed out on seeing him on stage.  I was getting a few death stares for having an unruly child in assembly so decided I had worn out my welcome.
We came home and set up for our 'cyber' tea party to raise money for Cuppa for Heart Kids. 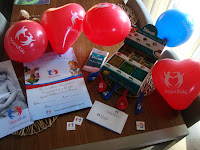 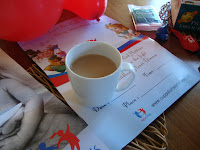 So far Blue Zone has raised over $100 for Heart Kids Australia.

You can make a donation online direct to Cuppa for Heart Kids HERE!

We did some work, we had a few tantrums and fought a nap. We whinged, we coughed, we puffed and panted like a steam train. We did actually get some dinner sorted tonight, so that was a bonus.

I hate having sick kids. I really don't cope at all.

Like I said is it the weekend yet? We will be spending it stuck in doors no doubt whilst Mst 2 fights this silly bug.  How will you be spending your weekend?  (Try not to make me too jealous)