My pregnancy was pretty normal (so I thought) I had the usual scans done, which all appeared normal according to the Sonographer.

For some reason I ALWAYS had that niggling feeling that something wasn't right.  I would lie in bed at night and struggle to picture a baby laying in the cot we had set up in the nursery.

My due date came and went,  I had my OB appointment when I was 4 days overdue. She decided that because my BP was high and I hadn't had a lot of fetal movement to induce me the following day.

My OB broke my waters around 9am, put on the drip around 11am and labour slowly progressed.

Our son was FINALLY born at 6:09pm that day and we were elated!!

All was going well (or so we thought!!)

He wouldn't settle for me and he kept gasping for breath and every time I said to the midwife he can't breath she just said it was normal and he would have mucus on his lungs from the birth etc.

Around midnight the midwife finally convinced me to let them take him to the nursery for a while so I could get some rest. I reluctantly agreed. (looking back I'm glad I did)

About an hour later the Paediatrician was knocking on our door telling us that something was wrong with our son, of course I thought straight away it's his lungs because he was breathing funny, she said "NO IT'S HIS HEART!! " I was like WTF NOOOO it's his lungs!!  Yep. I actually argued with her.

She took us into the nursery where we found our gorgeous little boy attached to oxygen and nurses rushing around everywhere getting organised to move him to the PICU ward so he could have an ECO cardiogram to confirm his heart problem!

HOLY CRAP in a matter of minutes our world had crumbled.

Our baby boy was seriously ill and I had no control over what was going to happen from now on..........

Cut to the chase... His heart problem was confirmed, "Transposition of the Greater Arteries with ASD and VSD" basically the two main arteries were crossed and the blood wasn't flowing correctly which meant he wasn't getting any oxygen into his blood. He also had two holes in the heart.

We were organised to be on the next flight to Melbourne so he could get proper medical treatment.

The hardest thing was phoning our parents to tell them the terrible news. We both sobbed down the phone as we rung them. Our mums were both organised to fly to Melbourne to be with us the following day. I was numb and didn't really care what else was going on.  I sat on the plane and sobbed. People must have thought I was crazy. I still had my hospital tag attached. I look like I had escaped from a mental ward.

I had just become a new mum and this was NOT meant to be how things happened. Nobody had warned me that things can go wrong. Why wasn't THIS discussed at one of my many midwife appointments?

He had his first procedure called a "septostomy" when he was less than 24 hours old, to improve the blood flow while we waited for his major surgery. They needed Logan to grow a bit before operating on him.  The heart is the size of your fist so you can imagine how tiny the heart is of a 7lb 1oz newborn.

Logan finally had his arterial switch operation, which involved open heart surgery at 8 days old, it was the 18th March 2004. He was on heart bypass and in theatre for 8hrs. The LONGEST 8hrs of my life.  I will NEVER forget that date.
﻿﻿
They had to switch the two main arteries so they were no longer crossed over and the blood could flow correctly. The surgeon attempted twice because he was not happy with the first result.
We hit a few bumps but thankfully in the end it was all a success and he hasn't had any dramas since. (Touchwood!!) 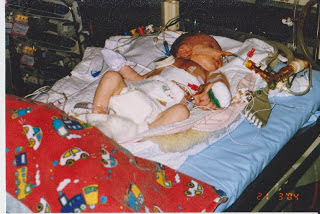 After 3wks in Melbourne we finally flew home to Tassie and our VERY relieved family and friends.

This sentence jumped out at me one night....

"Childhood heart disease is no fault of the parents or the child. It is simply a result of the cruel hand of fate."

It is hard to accept that reasoning though, it MUST have been something I did or didn't do, why else would it happen?

Logan is now a very active tween. His operation has been a success so far and he visits a cardiologist bi-annually now to monitor his progress and also keep track of a leaking heart valve.

I still struggle with what he went through and it took me over 3yrs to commit to having another baby. I am glad I did go back again though. Being a big brother is the best thing for Logan.

We had a rocky start to parenthood but I am glad we have Logan in our lives and I wouldn't change him for the world!

Mother's instinct is very real and something I am still learning to listen to when it comes to our beautiful boys! 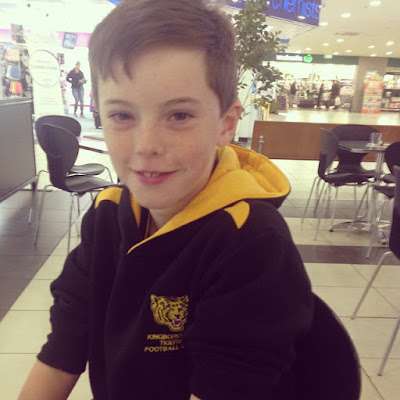 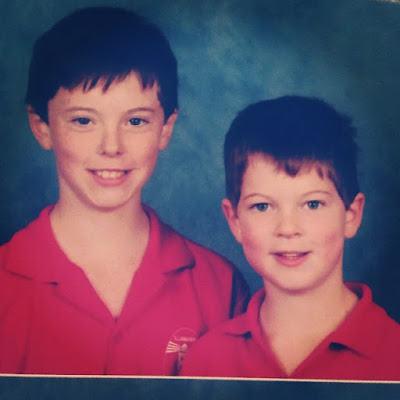 sevencherubs said…
what an emotional journey. I just wrote about some of my birth stories on my blog and mine were nothing compared to yours! I seriously cannot imagine - you are amazing. Naomi x
February 23, 2011 at 6:47 PM

Tracy at Blue Zone said…
Thanks Naomi!
I guess we are one of the lucky families that can look at our son each day and be thankful things worked out for the best.

He is coming up to his 7th bday and is a VERY busy boy. We are due for his cardio review next week and I must admit I ALWAYS get nervous about what they may or may not found.
February 23, 2011 at 6:59 PM

Glow said…
Wow what a journey! Seeing our babes attached to machines is just heartbreaking. So glad it's all been good so far.
Thanks for linking up to FlogYoBlog Friday.
July 3, 2011 at 3:45 PM